Our new MIDI Loop Switcher: The Story of the Mini Effect Gizmo X

By RJM Music TechnologyDecember 6, 2021 No Comments

What is a MIDI Loop Switcher?

Before we start talking about the evolution of our first MIDI loop switcher to the current one, let’s talk a bit about what they are.

Having a MIDI loop Switcher like the Mini Effect Gizmo X makes it easy to select which pedals are included and/or excluded from your presets and recall them with the MIDI controller. The Mini Effect Gizmo has a lot more advantages and capabilities than other MIDI loop switchers on the market.

Years ago, when we came out with the first Mini Effect Gizmo, we thought it would make a great expander to the pedalboard controller that we had thought about building, but had not completed.

Turns out we ended releasing the Mini Effect Gizmo about 4 years before the Mastermind PBC/10.

After Ron developed the PBC/6X which was a smaller version of the PBC/10, but with 6 reorderable loops, we started thinking about overhauling the Mini Effect Gizmo.

When we work on a new product, we take all the feedback that we’ve had over the years, and we take a look at what’s out there and what’s missing.

If there’s something great out there already that we can’t improve upon, then we won’t create the product because we really don’t want to do a “me too” product.

Every product we work on must add value and solve some additional problems. 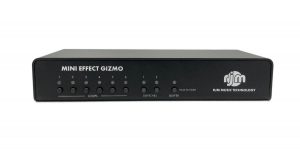 Ultimately when we designed the new Mini Effect Gizmo X, we decided to take the core of the PBC/6X, including the 6 reorderable loops and put it into the MEGX.

How is it different than other similar products that are on the market?

The MEGX is stereo capable, meaning you can use mono or stereo or a mix of both.

Using the “split mono” feature, the stereo loops can be split into two different pedals instead of left and right sides, allowing you to connect up to 12 mono pedals with the right cabling.

And, like the PBC/6X the order of loops can be changed at any time.

Using fuzz pedals with a switcher can be problematic, because many fuzz pedals interact badly with the buffers found in most switches.

To solve this, we’ve created fuzz mode. This allows you to tell the MEGX which loops have fuzz pedals in them, and the MEGX will automatically turn off the input buffer when it would interfere with a fuzz pedal and turn it back on when the fuzz pedal isn’t active.

When used with an RJM Music MIDI controller like the Mastermind GT, LT or PBC, the Mini Effect Gizmo X can act as a tuner, displaying the tuner output on the Mastermind’s display.

Usually with a small product like this, you wouldn’t see a Mac, PC, and iPad editor. However, the MEGX has a lot of features – far more than could be accessed from the front panel buttons so we decided an editor would be really useful. The MEGX editor allows you to do all of your setup quickly, allowing to you access all of the power of the MEGX.

Did we succeed at creating the best MIDI Loop Switcher?

The first run of MEGX in July of 2021 and sold out far quicker than we thought we would.

We had such issues with chip and parts shortages that we really didn’t think we’d be able to have another run of them before 2022.

After a few miracles, we got the parts we needed, and we were able to squeak out a small run. It was smaller than what we had wanted to make but we’ll take what we can get.

The second run of Mini Effect Gizmos just came in 2 weeks ago and are nearly sold out. Hopefully the next run will be here at the end of January.

The Mini Effect Gizmo X is available for sale now from us and from RJM dealers. Please contact us at support@rjmmusic.com if you have any questions!